The company was one of five entities contributing $1 million or more to the fund, allowing for the full capitalization of the program a year in advance of the deadline.

“With North Dakota’s economic growth expected to continue well into the future, affordable housing development remains a top priority for our state,” commission members said in a joint statement. “North Dakota taxpayers, whether they are individuals or businesses like QEP Resources, recognize this need and have shown resounding support for the Housing Incentive Fund.”

“QEP Resources is excited and thankful for the opportunity to contribute $1 million to support the state’s affordable housing development program,” said Matt Thompson, Vice President of QEP Energy’s Northern Region. “As we safely and responsibly develop North Dakota’s natural resources, we are committed to supporting the growth and development of the state’s local communities through programs like the Housing Incentive Fund. In addition, we allocated more than $800 million of capital investment to our North Dakota operations in 2013, and we look forward to continued investment in the state for years to come.” 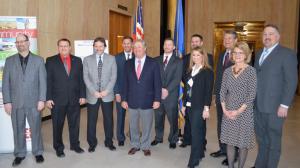 Five entities contributed $1 million or more to the fund, allowing for the full capitalization of the program one year in advance of the deadline.

“We sincerely appreciate the support our development program has received,” said Jolene Kline, NDHFA executive director. “We look forward to seeing these developments through to their completion, providing the affordable housing North Dakota’s communities need for healthy growth and development.”

The Industrial Commission recommended that HIF be reauthorized during the 2013 legislative session. NDHFA received a $15.4 million general fund appropriation and was authorized to further capitalize HIF by issuing $20 million in state tax credits.

For more information about HIF and the developments it supports, contact Kline or Bill Hourigan at (800) 292-8621 or info@ndhfa.org. Information is also available online at ndhousingincentivefund.org.

HIF was reauthorized during the 2013 Legislative Session and NDHFA received a $15.4 million general fund appropriation and was given the authority to further capitalize the program by issuing $20 million in state tax credits by Dec. 31, 2014. Strong public support resulted in the HIF being fully funded well in advance of the deadline.

Almost 450 contributions were received with the greatest monetary support coming from the banking community. Twenty-eight financial institutions contributed more than $11.3 million combined. Forty-two contributions were made by businesses totaling $3.6 million. More than $5 million was directed to the fund by 378 individual taxpayers; the average household contributing $13,500.

“With North Dakota’s strong, diversified economy contributing to statewide growth that is expected to continue well into the future, affordable housing choices are more important than ever,” said Jolene Kline, NDHFA executive director. “Greater understanding of this need by the public allowed for the rapid capitalization of the fund.”

In November, NDHFA announced that in only two funding rounds, it had committed all of HIF program dollars to 34 projects, leveraging $150 million in construction financing. The program will create 934 housing units, 220 are set aside for households that provide essential community services in energy-impacted communities including education, law enforcement, and medical personnel. Approximately one-third of the developments will provide housing for special needs households including disabled, homeless and elderly individuals and families.

North Dakota Housing Finance Agency is a self-supporting state agency that finances the creation and rehabilitation of affordable housing across North Dakota. The North Dakota Industrial Commission oversees the agency. To learn more about HIF and developments it supports, contact Kline or Bill Hourigan at (800) 292-8621 or info@ndhfa.org. Information is also available online at ndhousingincentivefund.org.

Officials celebrate the opening of a new apartment complex in Lignite, ND.

“On behalf of the state of North Dakota, thank you to Lignite Investments for providing housing for our expanding workforce,” Lt. Gov. Wrigley said, attending the open house on behalf of the Industrial Commission. “Public-private partnerships like this make affordable housing more available, they help families establish roots and they help essential workers settle into the communities they serve.”

In August, North Dakota Housing Finance Agency (NDHFA) made a commitment of $1.27 million to the project through the Housing Incentive Fund (HIF), allowing nine units in the development to be reserved for essential service workers. These units will rent for $490 to $1193 per month. The developers are also pursuing an interest rate buy-down through Bank of North Dakota’s FlexPACE program. The Industrial Commission oversees both state agencies.

Capitalized by contributions from state taxpayers, HIF provides developers of rental housing with low-cost financing if units are set-aside for essential service workers and low- to moderate-income households. United Community Bank of North Dakota made a $270,000 HIF contribution that directly supports the Lignite development.

Contributors receive a dollar-for-dollar state tax credit for contributions. Contributions can be targeted to a specific project or community. More information on HIF is available online at www.ndhousingincentivefund.org.

Lignite Investments, LLC is a group of investors with backgrounds in development, construction and finance. Upon hearing that Lignite had a zero vacancy rate, the group chose to develop a facility that would help Lignite grow by addressing the community’s need for both affordable and market-rate housing.

“When we heard about Lignite’s struggle to provide affordable housing, we felt that this was a great opportunity as fellow North Dakotans to try to do what we could to help,” said Brian Osowski, a Lignite Investments LLC partner.

NDHFA is a self-supporting state agency that finances the creation and rehabilitation of affordable housing across North Dakota. The North Dakota Industrial Commission, consisting of Dalrymple as chairman, Agriculture Commissioner Doug Goehring and Attorney General Wayne Stenehjem, oversees the agencies.

BISMARCK, ND – Sixteen projects have been selected to receive the balance of the affordable housing development support available through the North Dakota Housing Incentive Fund (HIF).

“With the public-private partnerships promoted by the Housing Incentive Fund, we are taking an active role in addressing the state’s affordable housing needs,” said Gov. Jack Dalrymple,  “I encourage businesses and individuals to continue to contribute to the fund so that all of these projects can move forward.”

“The program funding will spur more than $150 million in affordable housing development statewide,” said Stenehjem. The Commission oversees the state’s housing development efforts and urged the legislature to reauthorize HIF during the 2013 session.

NDHFA made commitments to the first 18 projects this summer. In total, HIF will support the development of 934 housing units with 220 units set aside to house essential service workers, a legislative priority. Approximately one-third of the developments will provide housing for special needs households including disabled, homeless and elderly individuals and families.

To ensure that the housing units are affordable, the fund must be capitalized by state taxpayers. Contributions can be targeted to a specific project or for general use in a community or region. Individuals and businesses contributing to the fund receive a dollar-for-dollar state tax credit.

“Contributing to HIF is a simple yet highly effective way to help North Dakota communities build housing that is affordable for all their residents,” said Jolene Kline, NDHFA acting executive director.

The agency has until Dec. 31, 2014, to fully capitalize the fund. To learn more about the projects selected or how to contribute to the fund, contact Kline or Bill Hourigan at (800) 292-8621 or info@ndhfa.org. Information is also available online at www.ndhousingincentivefund.org.

NDHFA is a self-supporting state agency that finances the creation and rehabilitation of affordable housing across North Dakota. 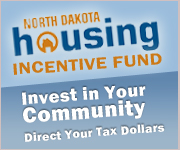 BISMARCK – The North Dakota Housing Finance Agency (NDHFA) has committed more than $20 million from the Housing Incentive Fund (HIF) to 18 projects across the state.

“The need for affordable housing is felt in communities statewide,” said members of the North Dakota Industrial Commission in a joint statement at their recent meeting. “NDHFA selected projects that address one of the state’s most critical needs – housing for police officers, teachers, nurses, waitresses, clerks, and elderly and disabled households.”

The 2013 Legislature reauthorized HIF at $35.4 million with a priority of providing housing for essential service workers (ESW) in energy-impacted counties and preserving and providing for low- and moderate-income households.

NDHFA received 26 applications totaling more than $36 million. Applicants that set aside units for ESW received a scoring preference. More than half the successful applicants reserved units specifically for ESW. The projects selected include:

An ESW is defined as an individual employed by a city, county, school district, medical or long-term care facility, the state of North Dakota, or others determined by NDHFA to fulfill an essential public service. To qualify for these rent-restricted units, a household’s primary source of income must come from employment in the ESW-identified field.

HIF received a $15.4 million general fund appropriation from the state. The balance of the fund must be capitalized by taxpayer contributions.

“Before any of these projects can break ground, the fund must have contributions adequate to cover the conditional commitments,” said Jolene Kline, NDHFA acting executive director. “Contributing to HIF is a simple yet highly effective way to help North Dakota communities build safe, decent and affordable housing for all their residents.”

Individuals and businesses contributing to HIF receive a dollar-for-dollar state tax credit. Contributions can be directed to a specific project or community. NDHFA is authorized to issue tax credit certificates to contributors on a first-come, first-served basis up to a maximum $20 million. Contributions to the fund currently stand at more than $1.1 million.

Contributor and developer information is available online at www.ndhousingincentivefund.org or by contacting Kline or HIF Program Administrator Bill Hourigan at (800) 292-8621 or info@ndhfa.org. Applications for the next funding round must be submitted by 5 p.m. (CDT), Monday, Sept. 30.