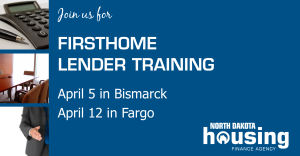 “The training includes an introduction to our homeownership programs – FirstHome, HomeAccess and North Dakota Roots, a review of the different loan types, borrower and property eligibility discussion, and how to lock a loan,” said Dave Flohr, NDHFA homeownership division director.

The trainings will be held on April 5 at the Comfort Inn, 1030 E Interstate Ave, Bismarck; and April 12 at the Expressway Suites, 4303 17th Ave S, Fargo. Both training sessions will begin at 9:00 a.m. CDT and should be completed no later than 1:00 p.m. There are no registration fees, however pre-registration is required. 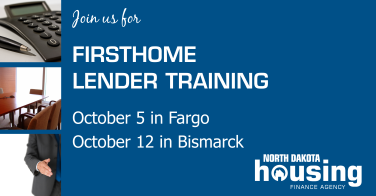 The training is intended to introduce participating lenders to the Agency’s homeownership programs – FirstHome, HomeAccess and North Dakota Roots, provide a review of different loan types, borrower and property eligibility, and guide lenders through the process of locking a loan with NDHFA.

There are no registration fees for the lender training, however pre-registration is required. A block of sleeping rooms are reserved at both hotels. If you have questions, contact Dave Flohr or Kim Becker at (800) 292-8621 or hfainfo@nd.gov.

The training is intended to introduce lenders to the Agency’s homeownership programs – FirstHome, HomeAccess and North Dakota Roots, provide a review of different loan types, borrower and property eligibility, and guide lenders through the process of locking a loan with NDHFA.

There are no registration fees for the lender training, however pre-registration is required. Register online at https://www.ndhfa.org/LenderReAgent/LenderTraining.html. If you have questions, contact Kim Becker at 800/292-8621 or kbecker@ndhfa.org.

“With the help of its partners, the Housing Finance Agency is able to make a significant impact in providing affordable housing in our state,” said Attorney General Wayne Stenehjem, who presented the awards on behalf of the North Dakota Industrial Commission.

NDHFA’s lender awards are based on participation in the Agency’s homeownership programs and involvement in locally sponsored affordable housing projects and events. In addition to honoring the outstanding lending institutions that produce its loans, the individual loan officer that originated the most NDHFA loans at that lending institution was also recognized.

Kevin and Cherie Collins of Minot and the Grand Lodge of North Dakota, Independent Order of Odd Fellows of Devils Lake each received Housing Production Awards.

The Collins purchased and refurbished Grayce Manor, a home in Minot that provides affordable housing for young adults in the Transition into Independence Pilot Program. These individuals no longer qualify for children services yet do not meet the criteria for adult services and often lack natural support systems. Grayce Manor currently provides an affordable home for seven program participants.

Grand Lodge of North Dakota, Independent Order of Odd Fellows strives to provide a safe haven for formerly homeless and mentally disabled residents at Prairie Heights Apartments, a 23-unit project located in Devils Lake. Prairie Heights has been beneficial to the residents, providing them with not only safe, quality housing, but a certain pride and independence that can only come from having a place to call home.

Keith Olson of Crosby and Mike and Angela Christianson of Minot were recognized by NDHFA with Leadership Awards.

Keith Olson has been active in the development of several affordable housing projects in Crosby, Kenmare, Ray and Williston. He has worked tirelessly to get these projects off the ground. And, his impressive knowledge of North Dakota resources has been instrumental in the development of affordable housing for teachers, first responders, city employees and retail sector employees.

Mike and Angela Christianson recognized the serious housing shortage for lower-income tenants and partnered with the Transition into Independence Program, offering below-market rate apartments to program participants. The Christiansons’ dedication to helping others was called an asset to the community of Minot.

NDHFA began recognizing its housing partners with the Champion of Affordable Housing Awards in 1995. In addition to recognizing its lending partners and affordable housing advocates, NDHFA honors real estate agents that promote the Agency’s homeownership programs during their association’s annual conference in September. For more information on the awards or other NDHFA programs, contact the Agency at (701) 328-8080, (800) 292-8621, (800)366-6888 (TTY) or www.ndhfa.org.