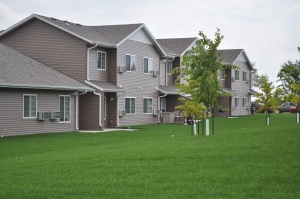 A three-person household that earns $35,000 or less would be income qualified to rent one of the townhomes with two-bedroom units renting for $650 per month and three-bedroom units for $795.

MINOT – The successful completion of the first phase of Washington Townhomes was celebrated today in conjunction with the groundbreaking for another 32 affordable housing units.

“The dedication and groundbreaking of Washington Townhomes is a significant milestone in Minot’s efforts to recover and grow in the aftermath of the historic 2011 flood event,” said Gov. Jack Dalrymple, who attended today’s ceremony. “A strong partnership between the public and private sectors helped make this project a reality for the community. More than $3.4 million in state funding, including $750,000 from the governor’s discretionary fund, was provided for this project to help bring additional affordable housing opportunities to Minot and the region.”

Construction on the first phase of the town home project began approximately one year ago. The second phase of the development is located just north of the first. Beyond Shelter, Inc. (BSI), the Minot Housing Authority and the North Dakota Housing Finance Agency (NDHFA) co-hosted the event at the original project site, 801 18th Avenue SE in Minot.

“Beyond Shelter’s mission is to improve lives and create communities by developing housing for those most in need,” said Lynn Fundingsland, BSI CEO. “Without the support of both the private and the public sector, our organization would not be able to produce the housing that is helping the City of Minot recover and grow.”

NDHFA allocated Low Income Housing Tax Credits to support both phases of the development. Through the LIHTC program, property owners receive an annual tax credit from the federal government for up to 10 years based on various requirements such as the amount of capital invested and the level of commitment to low-income tenancy.

“NDHFA is charged with ensuring that there is housing for everyone in our state. We are proud to partner with Beyond Shelter and the Minot Housing Authority to provide this community with much needed affordable housing,” said Jolene Kline, NDHFA acting executive director.

A three-person household that earns $35,000 or less will qualify to rent the existing townhomes with two-bedroom units renting for $650 per month and three-bedroom units for $795. The second phase of the development will also be income targeted, following a similar rent structure. 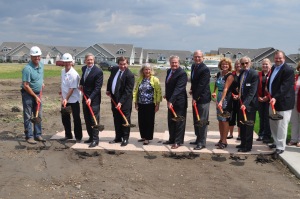 The successful completion of the first phase of Beyond Shelter, Inc.’s Washington Townhomes was celebrated in conjunction with the groundbreaking for another 32 affordable housing units.

The development’s second phase will mirror the first, consisting of 18 two-bedroom, 12 three-bedroom and 2 four-bedroom units. Six of the two-bedroom units will be accessible. BSI anticipates that phase two will be completed by July 2014.